How to create a best-selling card deck | The Write Idea

How to create a best-selling card deck 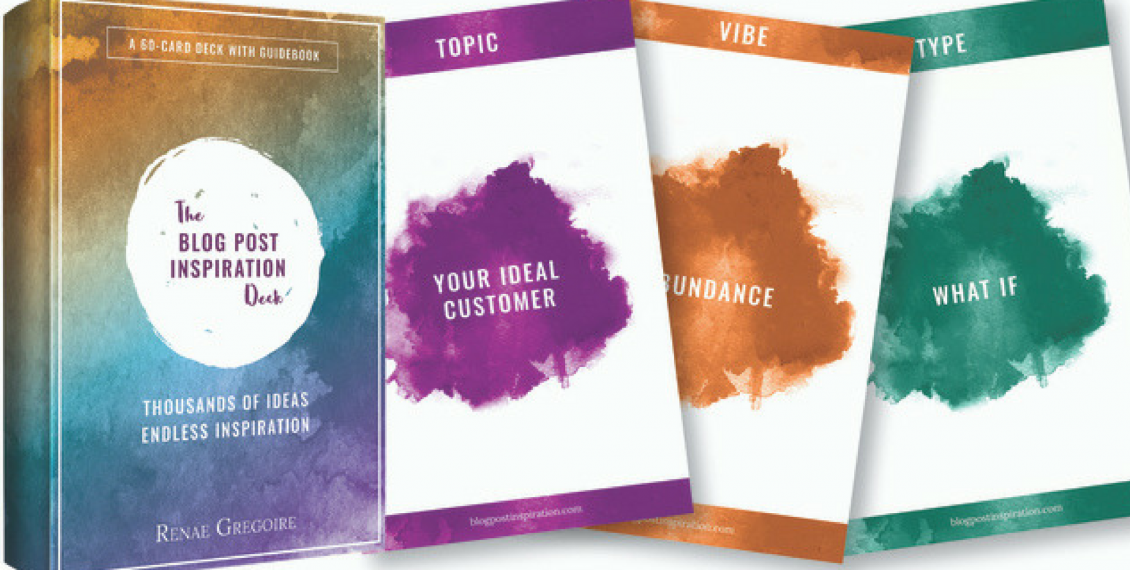 How I created a soon-to-be-bestselling card deck

I've been talking to my tribe about my upcoming card deck The Blog Post Inspiration Deck for a little while now.

But the only reason I've done so is because my card deck mentor Marcy Nelson-Garrison decided to reopen her Card Deck Master Class program -- and it's open right now!

That's why I thought I'd share my journey, so you can see if creating a card deck is something you'd like to do.

I think the card deck idea first took hold in me when I purchased my first deck, the beautiful deck called SHINE, by Julie Santiago. The cards are large and beautiful and square, and the font is delightful, the box is amazing ... I fell in love! And I knew then that I wanted to create a card deck.

The idea sat in my mind and then BAM, along came a one-month program designed to help me brainstorm and then create a "passion project." It hit me so strongly -- YES! A passion project! That's what my card deck was. And IS.

So when I joined that month-long program, I already knew that my passion project would be a card deck!

I shared my idea with the women in the group, and everyone loved it!

However, the idea quickly fizzled because I ran into questions the program leader couldn't answer, questions about using other people's quotes, printing ... what really is basic stuff, I realize now.

Sadly, I closed the card deck "folder," so to speak, but the idea was still close to my heart.

Then, lo and behold, I somehow ran into information about The Card Deck Master Class.

I was like, "WHAT?!? A whole program specifically focused on creating a card deck?!? Someone, please take my money!"

LoL. It didn't actually happen that fast. I corresponded with Marcy a bit by email because I was worried about having to miss some of the class sessions. But she assured me that they'd be recorded.

I think I had a few other objections, but they were weak, because ... well ... CARD DECK CLASS!!!

I signed up for the Card Deck Master Class in September, 2017. But I didn't start out wanting to create The Blog Post Inspiration Deck.

In fact, I wanted to create a deck around the unique process I go through when preparing to write marketing content for clients.

I brought my ideas to Marcy and the group.

I worked through the course modules.

I attended bi-weekly mentor calls with my classmates and Marcy on Zoom.

I attended bi-weekly "studio sessions," where we met to work on our card decks.

I worked through more modules.

Frankly, I was having a super hard time trying to mash my concept into the form of a card deck.

I was starting to think I'd made a mistake ... that I wouldn't be able to do it.

The reward of giving yourself fully to the creative process

And then, suddenly, one day during one of our two-hour studio sessions, I was messing around with one of my spreadsheets and an idea suddenly burbled up inside me.

And I began to type.

Within ONE HOUR, I had a card deck with three suits of 20 cards each, most of which remain in the final version of the deck that's with the printer right now.

And I believe it happened because I gave myself the creative time and space and noodling permission required to be open to what the Universe was asking of me.

It wasn't a deck about my process (although I'm still dreaming of that one!) ... it was, initially, The Blog Post Idea Generator!

With Marcy's guidance in the class, I hired a designer or two, but wasn't having any luck with the concepts that they -- and I -- were coming up with. Maybe you can see the beginnings of the deck I wound up with in the images in the third column. At least I liked the colors.

But I wasn't so hot on the design.

Then I remembered a series of graphic images I had created last year, and am now offering FOR FREE as a 30-day email series called The Power of CHOOSE. It's just powerful quotes on our choices dressed up in colorful attire. Does that circle look familiar?

Take a look at the back of my cards. The CHOOSE series is where I got the inspiration for the circle for the back of my card deck cards!

(By the way, you can still sign up for that CHOOSE series; it's totally free!)

After finalizing the design, next came the task of choosing a printer, deciding on what kind of packaging and insert I wanted, and how many decks to print.

The experience has been so amazing! I am so happy that Marcy's Card Deck Master Class program found me, and I am thrilled to talk about my experiences!

If you have any questions, just hit me up in the comments.